Posted on June 21, 2010 by uprootedpalestinians 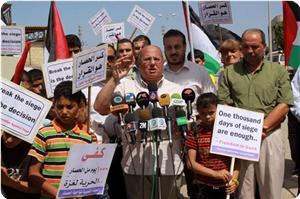 Children were among the protesters and reminded the world that they were deprived of their simplest rights as a result of the siege.

MP Jamal Al-Khudari, the head of the popular committee against the siege that organized the sit-in, said that the closure of the Mintar crossing refutes Israel’s allegation of easing the siege on Gaza.

Around 800 trucks loaded with goods used to enter Gaza through the Mintar crossing but it is now closed, he said.

Khudari said that Israel was circulating untrue media campaigns to ease the international pressures on it after its brutal attack on the Freedom Flotilla, adding that there were no new facilities and construction material was still banned from entering the Strip.

A displaced Palestinian
View all posts by uprootedpalestinians →
This entry was posted in Protest, Siege on Gaza. Bookmark the permalink.