Posted on August 31, 2010 by uprootedpalestinians 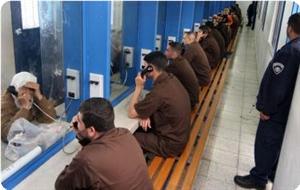 JENIN, (PIC)– The Israeli prisons authority (IPA) is fully denying more than 40% of the Jenin prison population the right to family visits against 30% who are denied partial visits, the Palestinian Prisoner Society reported.

Director of PPS in Jenin, Ragheb Abu Diak said in a press statement Monday that banning family visits from prisoners is a serious violation of human rights principles and the Fourth Geneva Convention, which guarantees the right to regular visits as stipulated in laws, regulations, and international conventions.

In his statement, Abu Diak called on the Red Cross to move quickly to monitor arbitrary measures the IPA has been taking against prisoners, particularly the humiliating searches at the Jalama gate when going to visit their children.

To add to their suffering, prisoners are forced to purchase their basic needs, like clothes, shoes, and blankets, from the prison’s canteen at high prices, since the lack of visits has led to a shortage in those items.

All families of prisoners from the Gaza Strip have been fully denied seeing their children for four consecutive years.
River to Sea

A displaced Palestinian
View all posts by uprootedpalestinians →
This entry was posted in Human Rights, Palestinian detainees. Bookmark the permalink.