>Barak: Army to remain on alert at Egypt borders

Posted on March 4, 2011 by uprootedpalestinians 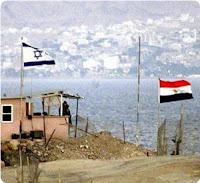 NAZARETH, (PIC)– Israeli war minister Ehud Barak has said the Israeli army will stay on alert along borders with Egypt until the security situation during the revolution there stabilizes.

He added the army will also boost efforts to raise the security fence along the border.

The Israeli army has allowed Egyptian armed forces to deploy in the Sinai peninsula since the turn of events in Egypt, but those forces are due to withdraw when the unrest calms.

A displaced Palestinian
View all posts by uprootedpalestinians →
This entry was posted in "Peace-agreement", Egyptian revolution, Zionist entity. Bookmark the permalink.