Posted on March 8, 2011 by uprootedpalestinians 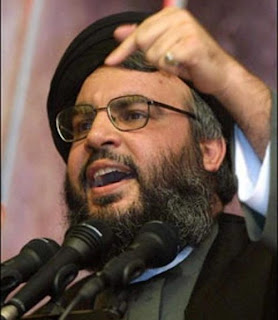 As we drove down the highway from Naqura leading to Bent Jbeil on the border with occupied Palestine, Latifa, a 70 year old small but lively woman with us looked on saying: “could I actually go back to my village one day? He never breaks a promise.” By “he” she meant Hizbullah’s Secretary General Sayyed Hassan Nasrallah. During the commemoration of the martyrdom of Hizbullah leaders, the crowds were exhilarated when Sayyed Nasrallah called on the resistance fighters to be ready to occupy Galilee. He didn’t quite promise, but made clear to the whole world that Hizbullah can take control of Galilee.
Latifa was 6 years old when she was displaced with her family from one of the villages in upper Galilee. She still remembers how she had to hold her baby brother while having sore feet herself after miles of hiking.
The hectares of lush greenery are bound to catch your eye once you look southwards from the highest peak in south Lebanon. The Upper Galilee is quite remarkable from that point. When we went up to Maroun Al Ras, we could easily get a universal perspective of most of the area. Then it struck my mind: Hizbullah has been scrutinizing this land for the last 11 years. If they have people like Latifa, or young men and women whose parents and grandparents were driven out of those areas, then they are sure to be well indoctrinated and ready to fight for their land. In addition to the fact that Hizbullah’s resistance has detailed knowledge of the nature of the landscape and can thereby move easily and remain uncovered. This has been an issue always to the credit of the Islamic resistance. The latest speech by Sayyed Nasrallah telling the fighters to be ready if need be to occupy Galilee could naturally have impelled more hope.

I asked one of the retired generals in Lebanon, Gen. Hisham Jaber who is well read on Hizbullah’s tactics whether he believed Hizbullah can do the job. He answered:” Tactically, it is very much possible and even in a very short period of time.” I asked him what he meant by a “short period of time” and he said “hours.”

“Hizbullah is well trained for this and they know every square meter in all of Galilee. They don’t even need tunnels; they have areas like Maroun Al Ras that can allow them to study the territory. Gen. Jaber explained that Hizbullah only needs to get a hold of about 7 or 10 districts. And with small groups of about 40 to 50 well-trained and well-equipped fighters, they can take control, and force a siege on the entire area making close combat impossible for “Israel”.

However, Hizbullah will definitely be “crossing the red line” in “Israeli” terminology, and “Israel” could react severely by putting all of Lebanon under aggressive fire. The entire scenario is quite critical for “Israel” more than it will be for Lebanon. “Israel” will not only have lost control of Galilee which it could not bomb, it will also be incapable of holding up Hizbullah’s rocket fire which could reach strategic points in the heart of Palestine, namely the Ben Gorion Airport in Tel Aviv. Despite the fact that “Israel” has been working on its Iron dome anti-missile system which could be into effect in any future war, it can only stop around 40% of the rockets which on “Israeli” counts are more than 45 thousand.

But Hizbullah’s secretary general did say: “If “Israel” tries to invade Lebanon again, then be ready to occupy Galilee.” Hizbullah has never been willing to actually start a war. Sayyed Nasrallah has been an expert on balancing psychological morale boosting for the people, while launching psychological warfare on his enemy which he seems to be successful in doing at the right time using the right means.

The first to respond from the “Israeli” government was “Israeli” Prime Minister Benjamin Netanyahu, who said:” Nasrallah declared today that he will conquer the Galilee. I have news for him. He won’t.” Netanyahu did not say “He can’t.” “Israeli” analysts have always looked at Sayyed Nasrallah as a credible figure who can build up his case and turn any farfetched idea into reality.

A displaced Palestinian
View all posts by uprootedpalestinians →
This entry was posted in Galilee, Nasrallah. Bookmark the permalink.