Posted on December 11, 2011 by uprootedpalestinians

Shiekh Yusuf Qaradawi has issued a fatwa that allows Syrians to call for UN-backed intervention in their country’s affairs in case Arab states couldn’t force an end to “the slaughter of civilians,” he said.

“Countries that are going through this awakening and where Islamists rule will be very wise in their dealings with the west and Israel but they will not accept oppression,”

By Roula Khalaf in London

His call for the end of the Syrian regime helped galvanise Arab states’ pressure on Damascus.

If Arab states cannot force an end to the slaughter of civilians, he now says, Syrians too will have the right to seek UN-backed intervention.

“We were among those who called for revolution,” says the sheikh in an interview with the Financial Times, acknowledging his important role “before, after and in the future”.

Sheikh Qaradawi works out of the expansive office of his Muslim foundation on the outskirts of the Qatari capital, past a dusty library stacked with books on Islamic thought and history. An aide asks visitors to raise their voice to accommodate the cleric’s poor hearing……

…..The specificity of the Arab revolutions is that they have been popular uprisings, leaderless and uncompromising in demanding total change, says Sheikh Qaradawi. “People have to change from inside and fate will respond.”

……..He has been criticised for playing down the Shia revolt in Bahrain, where he supports Gulf Arab states’ line that the popular protests were sectarian and had links with Shia, non-Arab Iran.
…….As Islamists emerge as the biggest political force in the Arab world, his pragmatic views on Islam and democracy could be a useful moderating guide for Arab societies.

… ….Now that the tyrants have been removed … nothing prevents Islamists from taking their rightful place in the heart of society.”

……..He says he has counselled Egypt’s Nour party, the Salafi newcomer to the political scene whose strict religious strand is alarming liberals, to adopt “new thinking”. “I told our Salafi brothers … you are in your first political experience and have to deal with people with moderation, and I hope they will.”

He expects a change in the foreign policy of the region and says western nations have to “think” about how to deal with Islam, while Israel cannot continue to base its policies on “force”.

“Countries that are going through this awakening and where Islamists rule will be very wise in their dealings with the west and Israel but they will not accept oppression,” he says. 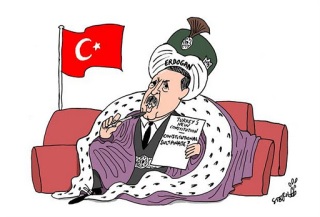 Although he sees no perfect model of an Islamic state today, he is impressed by Turkey, citing it as an example of a peaceful comeback for Islam in an entrenched secular state. “It’s excellent,” he says of the Turkish government led by the AK party.

“Our brothers the Turks … were able to serve their country and produce an economic and social renaissance … they have won over secularism calmly.” Turkey is the model of moderation, he adds, “and it’s a model that Arab countries can benefit from”.

A displaced Palestinian
View all posts by uprootedpalestinians →
This entry was posted in Conspiracy on Syria, Qaradawi, Turkey. Bookmark the permalink.