Posted on February 4, 2012 by uprootedpalestinians

Syrian President Bashar Assad (R) and Saudi King Abdullah bin Abdel Aziz (L) descend by escalator from their aircraft upon their arrival at Rafiq Hariri international airport, Beirut 30 July 2010, during an official visit. (Photo: AFP – Joseph Eid)
By: Yazan al-Saadi
In his biography of Hafez Assad, Patrick Seale casually recounts that when the founder of the current Saudi state King Abdul-Aziz ibn Saud was on his deathbed, he warned his sons to “keep your eye on Syria” to protect Saudi interests. Whether this “legend,” as Seale termed it, occurred or not is unknown. What is true, however, is that Saudi Arabia and Syria have had their interactions with one another marred by adversarial interests, with fleeting moments of cooperation, since that fateful warning by the late Saudi king.

on Saturday, the current Saudi king, Abdullah Ibn Abd al-Aziz, cancelled the kingdom’s al-Janadriyah festival ostensibly in solidarity with the Syrian people. Earlier last month, reports by the Kuwaiti newspaper Al-Rai revealed that Saudi Arabia may recognize and fund the Syrian National Council (SNC) in an effort to have current Syrian President Bashar Assad removed from power as he attempts to survive an on-going, widespread uprising. The news broke only one day after the Arab League, pressured by Saudi Arabia, announced its decision to suspend its monitoring mission in Syria.

Subsequently, the League suppressed the mission’s report and transferred the matter to the UN Security Council.

It seems that Saudi Arabia has banked on the end of Assad’s rule. The Saudi monarchy certainly hopes that a new government will emerge and that any government which emerges afterward will be more appeasing to Saudi interests. But, they also are working to ensure the transitional process does not plunge the region into turmoil.

The Struggle for the Middle East

Ever since the formation of the modern nation-states of Syria and Saudi Arabia, the relationship has always been turbulent. In the grand geopolitical power struggle, both countries commonly found themselves on opposing sides, each representing diametrically opposing ideologies that clashed within their borders or through proxies in Lebanon, Palestine, and elsewhere.

Syria prides itself as a secular republic and a bastion of Arab nationalism, with close ties to Russia. On the other hand, Saudi Arabia is a reactionary monarchy and embodies itself as a caretaker of Islam, while having an extensive bond with the US and Western Europe. True, the rhetoric of the two countries may not correspond with their practice, but the ideological narratives they superficially embrace are in conflict, and much of their foreign policy aims have been at odds.

Particularly in the 1950s and the 1960s, with the rise of Gamal Abdul Nasser’s pan-Arabism and the divide created by the Cold War, Syria and Saudi Arabia were firmly situated in rival camps. Each of these nations hosted the other’s opposition, exported competing propaganda, and developed opposing alliances. Yet, they did work together when they needed to.

This struggle played out in major events. Notably, Saudi Arabia, with Jordan and the US, backed a coup that dissolved Syria’s union with Egypt in 1961. That coup was short-lived. Baathist took over in 1963, which reignited the animosity between Saudi Arabia and Syria.

It was not until after the 1967 war, with the death of Nasser and the ascendancy of Hafez Assad, that relations significantly warmed up. King Faisal, the son-successor to Abdul-Aziz and a fierce opponent to Nasser, steadily sought to attract Syria with financial aid, offering more than US$1 billion annually.

This seemingly tepid relation was cut short during the late 1970s and early 1980s. Assad’s regime faced an assertive Muslim Brotherhood (MB) and was spurned by Sadat’s peace with Israel. Despite Syrian objections, Saudi Arabia did not expel MB leaders residing in the kingdom nor were the Saudi steadfastly against Egypt’s peace initiatives.

Syria’s alliance with the Islamic Republic of Iran, which blossomed during the Iran-Iraq War while the Saudis allied with Saddam’s Iraq, furthered tensions. The civil war in Lebanon permitted some respite as Saudi Arabia and Syria sporadically cooperated to preserve their respective interests. Their competing policies toward Iran and Lebanon, seeded during this decade, in many ways shaped relations between Syria and Saudi Arabia in the following decades.

Half-Men and Good Smells in the Air

The 90’s can be argued as the quintessential golden age for Saudi-Syrian collaboration. Both shared power over Lebanon after Taif. Iran was less of a threat at that time since American forces maintained a heavily presence in the Gulf. Also, neither Saudi Arabia nor Syria were interested in undermining the other politically. 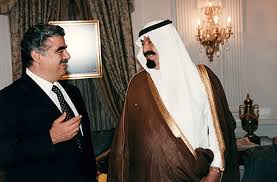 This era of mutual understanding came to a dramatic end during the reign of Bashar Assad, with Lebanon being the primary cause. In particular, the assassination of business tycoon and politician Rafikk Hariri, who had Saudi-Lebanese citizenship and was near to the Saudi monarchy, was the breaking point. The Syrian military presence, which had been stationed in Lebanon since 1976, was forced out of Lebanon. It did however maintain and enhance its alliance with Hezbollah, a Lebanese resistance organization the Saudis thoroughly loathed.

The relationship continued its descent during the 2006 Israeli attack on Lebanon. Saudi Arabia, and its allies, had hoped that Israel would be able to annihilate Hezbollah. Yet, it survived 34-days of bombardment and was able to stop Israeli soldiers from advancing far into Lebanese territory, boosting its regional popularity, as well as Assad’s.

Assad’s confidence came across during a speech to celebrate the “victory,” in which he dubbed, without naming names, the leaders of Egypt, Jordan, and Saudi Arabia as “ half-men.” Soon after, Syrian influence reasserted itself politically in Lebanon to the irritation of the Saudis.

The following two years saw the lowest point between Damascus and Riyadh. High-level contacts between the two powerful states were practically non-existent.

Furthermore, America’s belligerent policies brought Syria and Iran closer together. The destruction and occupation of Iraq by Anglo-American forces alarmed the Islamic republic and the Syrian regime, both fearing they would be next. Not surprisingly, the apprehension over security brought them ever-nearer, along political, economic, and military levels.

Syria’s closeness with Iran unnerved the Saudis. Tehran had re-emerged as the central threat to the Gulf with Iraq out of the picture. Despite their own frustration toward Syrian policies, Saudi leaders were equally uneasy over completely isolating or majorly destabilizing Syria, viewing such extreme acts as counter-intuitive. Assad’s regime had perfectly positioned itself at the core of major regional issues, such as those pertaining to Palestine or Iraq. Without Syria’s willing participation, Saudi Arabia would not have been able to further their interests in the region.

In order to break the dangerous impasse in Lebanon, Saudi Arabia and Syria began to soften their stances. Various leaked American diplomatic cables, obtained through WikiLeaks, illuminate how Saudi-Syria interactions between 2009-2010 changed. High-level visits were encouraged by the Saudi’s new long-term approach to challenge Iran by ending Syria’s isolation. This, in turn, led to “a good smell in the air” regarding expectations for the future.

The Syrian Uprising and Saudi Arabia

The outbreak of numerous regional uprisings radically changed everything. Most Arab governments and monarchies unexpectedly were confronted by their own population. The uprisings’ nature and vitality compelled governments to reconsider much of their foreign and domestic policies, at least on the surface, in vain attempts to placate a discontented public. It was also an opportunity for governments to realign themselves, or settle old scores.

The protests in Syria, fueled by brutal attempts by the Assad regime to repress it, grew considerably larger over time. After months of silence, the Saudis condemned the violence by the regime and recalled their ambassador from Damascus. King Abdullah, offering a rare, blunt, and public criticism of another Arab country’s domestic affairs, called on Syria to end its “killing machine.” Likewise, the Saudi authorities turned a blind eye to Syrian demonstrations against the Assad regime within the kingdom. This was quite extraordinary considering Saudi authorities rarely allow public demonstrations, let alone ones conducted by expatriates.

The Saudis view events in Syria as a historic opportunity to enhance their own strategic position. Their main concern is Syria’s relationship with Iran. Saudi Arabia hopes this relationship will be severed by the arrival of a new government, hence the current flirtations with the SNC as a potential alternative.
Certain doubts arise when considering questions regarding the SNC’s lack of a comprehensive representation with the protesters on the ground, or its level of legitimacy with the Syrian public. These doubts are heightened when recognizing that Saudi Arabia has been relentlessly attempting to guide the spread of democratic aspirations under their own terms.

The SNC is a broad organization, composed mostly of Syrian oppositional groups based outside Syria. It has a larger ratio of political religious groups such as the MB, which has historical links with Saudi Arabia. In turn, members of the SNC have been trying to attract Saudi backing since the formation of the organization, frequently sending messages of gratitude and compliments to the Saudi monarchy.
Interestingly, the Syrian regime has not directly confronted the Saudi monarchy. Rather, it has criticized other countries for supporting the opposition and the protests. Perhaps, this is an indication that the Syrian regime still perceives that the situation as salvageable, unwilling to entirely burn the bridge with Riyadh.

These moves by the Saudis may not be as successful as they hope. Haytham al-Manna, a representative of another competing oppositional group, the National Coordination Committee (NCC), noted in an interview with Al-Akhbar, that religious-political organizations like the MB are supported by about “10 percent of Syrian society.”

In another interview with Al-Akhbar, al-Manna stated, “In the Gulf there is a campaign against the Iranians. This might mean that the Gulf countries will try to turn Syria into a battleground against Iran. But we refuse to become the victims of a war by proxy. We want democracy and freedom in Syria. We do not want to be used by any other power for their interests.”

A recent Foreign Policyreport also emphasized increasing worries towards SNC by other oppositional groups. In one particular statement by a defected Syrian soldier who joined the Free Officers Movement (FOM), he described the MB as “malignant” and said that the FOM “has a limited relation with the SNC because they are controlled by the Muslim Brothers.”

Whatever maneuvers the Saudis have planned, history has shown that efforts to bring Syria into their sphere have not borne fruit. Such actions are even more likely to fail now as most of the Syrian public are suspicious of any attempt that undermines their path for liberty and self-determination.

Undoubtedly, Saudi-Syrian relations are in store for more struggles, whether the Assad regime endures or collapses.

A displaced Palestinian
View all posts by uprootedpalestinians →
This entry was posted in Istanbul Council, Nasser, Patrick Seale, Saudia, War on syria. Bookmark the permalink.