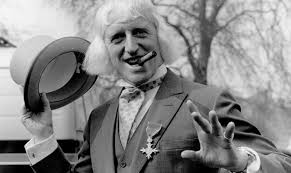 The new revelations claim that Jimmy Savile may had sexually abused 400 young people and children, sometimes on BBC premises, over a 40 year period.
Vatican spokesperson, Father Federico Lombardi, said Pope Benedict XVI firmly condemn the horrible crimes of sexual abuse of minors and considers the Savile revelations as “very grave”. American Catholic writer and women’s rights activist, Joanna Francis, had called Pope Benedict XVI, a ‘Zionist double agent‘ in September 2006.
“It’s deeply saddened that a person who had been soiled in this way could in his life time have been proposed for an honor by the Holy Sea, which in the light of recent information should certainly not have been bestowed,” said Lombardi.
Jimmy was a staunch supporter of the Zionist entity. During his 10-day aliya to Israel in 1975, he boasted:

“I’m the most Jewish Catholoc you will ever meet,” The Jewish Chronicle, November 3, 2011. During his stay, Jimmy also met Israeli president Ephraim Katzir and Jerusalem mayor Teddy Kollek. The trip was fully paid by Lord John Levy of the Friends of Israel Educational Trust. Levy maintains family residence in both London and Tel Aviv. His two sons live in Israel. Levy is a close friend of Israeli defense minister Ehud Barak.

Jimmy had berated the Zionist regime for being too soft after the 1967 Six Day War. British columnist and author Alan Hart has called it a “big fat Israel lie”. He claimed that the Zionist entity was never threatened by its Arab neighbors. Israeli invasion on June 5, 1967 “was not a pre-emptive strike or an act of self-defence. It was a war of aggression“. Read the article here.
Last week, after the news of Jimmy’s child sex abuses – Leeds Jewish Welfare Board removed a gold plaque in Savile’s honour from its Tree of Life at the Marjorie and Arnold Ziff Community Centre.
British Jewish businessman, Stuart Levin, bought Jimmy’s famous gold track suit at a recent auction sale for £550.

A displaced Palestinian
View all posts by uprootedpalestinians →
This entry was posted in Pope, Sexual Abuse, Vatican, Zionist entity. Bookmark the permalink.