US UK Genocide Against Iraq

Posted on January 3, 2013 by uprootedpalestinians

By Sherwood Ross
Approximately 3.3 million Iraqis, including 750,000 children, were “exterminated” by economic sanctions and/or illegal wars conducted by the U.S. and Great Britain between 1990 and 2012, an eminent international legal authority says.

The slaughter fits the classic definition of Genocide Convention Article II of, “Deliberately inflicting on the group conditions of life calculated to bring about its physical destruction in whole or in part,” says Francis Boyle, professor of international law at the University of Illinois, Champaign, and who in 1991 filed a class-action complaint with the UN against President George H.W. Bush.

The U.S. and U.K. “obstinately insisted” that their sanctions remain in place until after the “illegal” Gulf War II aggression perpetrated by President George W. Bush and UK’s Tony Blair in March, 2003, “not with a view to easing the over decade-long suffering of the Iraqi people and children” but “to better facilitate the U.S./U.K. unsupervised looting and plundering of the Iraqi economy and oil fields in violation of the international laws of war as well as to the grave detriment of the Iraqi people,” Boyle said.

In an address last Nov. 22 to The International Conference on War-affected Children in Kuala Lumpur, Malaysia, Boyle tallied the death toll on Iraq by U.S.-U.K. actions as follows:

Boyle’s class-action complaint demanded an end to all economic sanctions against Iraq; criminal proceedings for genocide against President George H.W. Bush; monetary compensation to the children of Iraq and their families for deaths, physical and mental injury; and for shipping massive humanitarian relief supplies to that country.

The “grossly hypocritical” UN refused to terminate the sanctions, Boyle pointed out, even though its own Food and Agricultural Organization’s Report estimated that by 1995 the sanctions had killed 560,000 Iraqi children during the previous five years. 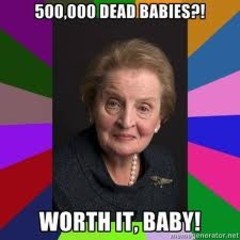 Boyle noted that then U.S. Secretary of State Madeline Albright was interviewed on CBS-TV on May 12, 1996, in response to a question by Leslie Stahl if the price of half a million dead children was worth it, and replied, “we (the U.S. government) think the price is worth it.”

Albright’s shocking response provides “proof positive of the genocidal intent by the U.S. government against Iraq” under the Genocide Convention, Boyle said, adding that the government of Iraq today could still bring legal action against the U.S. and the U.K. in the International Court of Justice. He said the U.S.-U.K. genocide also violated the municipal legal systems of all civilized nations in the world; the 1989 Convention on the Rights of the Child; and the Fourth Geneva Convention of 1949 and its Additional Protocol 1 of 1977.

Boyle, who was stirred to take action pro bono by Mothers in Iraq after the economic sanctions had been imposed upon them by the Security Council in August, 1990, in response to pressure from the Bush Senior Administration. He is the author of numerous books on international affairs, including “Destroying World Order” (Clarity Press.)