Posted on March 6, 2013 by uprootedpalestinians 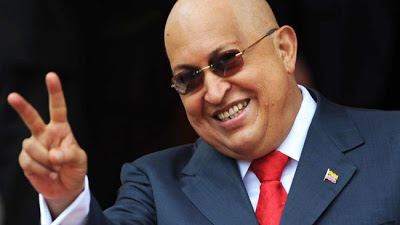 Venezuelan President Hugo Chavez died of cancer at a military hospital in Caracas on March 5, 2013.
.
By Dr. Kevin Barrett
Press TV
March 6, 2012
.
We know that the bankers who own the US government routinely try to kill any Latin American leader who refuses to be their puppet. We know that they have mounted thousands of assassination attempts against Latin American leaders, including more than 600 against Castro alone. We know that they have been experimenting with cancer viruses, and killing people with cancer, since the 1960s.

So if you think Hugo Chavez died a natural death,
I am afraid that you are terminally naïve.”

The Venezuelan president himself, before he died yesterday, wondered aloud whether the US government ~ or the banksters who own it ~ gave him, and its other leading Latin American enemies, cancer.
A little over a year ago, Chavez went on Venezuelan national radio and said:

“I don’t know but… it is very odd that we have seen Lugo affected by cancer, Dilma when she was a candidate, me, going into an election year, not long ago Lula and now Cristina… It is very hard to explain, even with the law of probabilities, what has been happening to some leaders in Latin America. It’s at the very least strange, very strange.”

Am I 100% certain that the CIA killed Hugo Chavez? Absolutely not.

It could have been non-governmental assassins working for the bankers.

But any way you slice it, the masters of the US Empire are undoubtedly responsible for giving Chavez and other Latin American leaders cancer. How do we know that? Just examine the Empire’s track record.

The CIA’s methods included exploding cigars, biological warfare agents painted on Castro’s diving suit, deadly pills, toxic bacteria in coffee, an exploding speaker’s podium, snipers, poison-wielding female friends, and explosive underwater sea shells.
The CIA’s assassination attempts against Castro were like a Tom and Jerry cartoon, with the CIA as the murderously inept cat, and the Cuban president as a clever and very lucky mouse.

Some might even argue that Castro’s survival, in the face of 638 assassination attempts by the world’s greatest power, is evidence that El Presidente’s communist atheism was incorrect, and that God, or at least a guardian angel, must have been watching over “Infidel Castro” all along.

Theology aside, the CIA’s endless attempts on Castro’s life provide ample evidence that US authorities will stop at nothing in their efforts to murder their Latin American enemies.

John Perkins, in his bestselling book Confessions of an Economic Hit Man, supplies more evidence that the bankers that own the US government routinely murder heads of state, using private assassins as well as CIA killers.

Perkins, during his career as an “economic hit man,” gained first-hand knowledge about how the big international bankers maintain their empire in Latin America and elsewhere.

Perkins’ job was to visit leaders of foreign countries and convince them to accept loans that could never be paid back.
Why? The bankers want to force these nations into debt slavery.

When the country goes bankrupt, the bankers seize the nation’s natural resources and establish complete control over its government and economy.

Perkins would meet with a targeted nation’s leader and say:

“I have a fist-full of hundred dollar bills in one hand, and a bullet in the other. Which do you want?”

If the leader accepted the loans, thereby enslaving his country, he got the payoff. If he angrily chased Perkins out of his office, the bankers would call in the “asteroids” to assassinate the uncooperative head of state.
The “asteroids” are the world’s most expensive and accomplished professional killers. They work on contract ~ sometimes to the CIA, sometimes to the bankers, and sometimes to wealthy private individuals. And though their specialty is causing plane crashes, they are capable of killing people, including heads of state, in any number of ways.
This isn’t just speculation. John Perkins actually knows some of these CIA-linked professional killers personally. And he has testified about their murders of Latin American leaders. Confessions of an Economic Hit Man is dedicated to Perkins’ murdered friends Gen. Torrijos of Panama and President Jaime Roldos of Ecuador. Both were killed by CIA-linked “asteroids” in engineered plane crashes.
Do CIA-linked killers sometimes induce cancer in their victims? Apparently they do.
One notable victim: Jack Ruby (née Jack Rubenstein), a mobster who was himself a professional killer, and whose last hit was the choreographed murder of JFK-assassination patsy Lee Harvey Oswald in the basement of the Dallas Police Department. Ruby begged to be taken to Washington to tell the real story of the JFK murder, but instead died in prison, of a sudden and mysterious cancer, before he could reveal what he knew.
Have the CIA-bankster “asteroids” ever tried to kill Latin American leaders with cancer?
The answer is an unequivocal “yes.”

Edward Haslam’s book Dr. Mary’s Monkey proves what JFK assassination prosecutor Jim Garrison had earlier alleged: Child-molesting CIA agent David Ferrie, one of President Kennedy’s killers, had experimented extensively with cancer-causing viruses for the CIA in his huge home laboratory. The purpose: To give Fidel Castro and other Latin American leaders cancer. (Ferrie himself was killed by the CIA shortly before he was scheduled to testify in court about his role in the JFK assassination.)

So if you think Hugo Chavez died a natural death,
I am afraid that you are terminally naïve.

ED Noor: A few others I have suspected as being victims of these induced cancers in the past include film maker Aaron Russo who blew the whistle on the Rockefellers and the NWO then died of cancer within a short time, controversial comedian Bill Hicks whose incendiary dialogue would have upset many, and Bob Marley.
Posted by Noor al Haqiqa at 3:03 AM
هل اغتالت الولايات المتحدة شافيز ؟ روسيا ستحلل عينات من الجثمان