Posted on April 8, 2013 by uprootedpalestinians 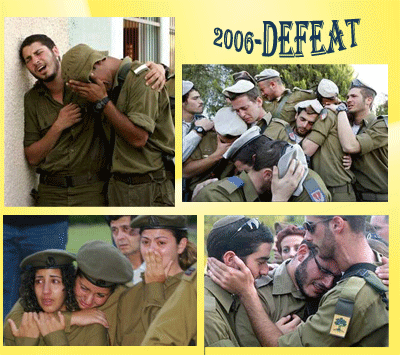 Recent Israeli reports have placed remarkable – and repeated – emphasis on Hezbollah’s military capabilities and its unprecedented potential for inflicting harm on Israel in the event of war. The reports mark a departure from Tel Aviv’s approach to the issue throughout 2012.
Large-scale devastation and a high number of casualties on the Israeli side, the reports reckoned, should be expected in any war with Lebanon, both in occupied Palestine and along the frontlines. The conflict would not spare Israeli infrastructure, including communications, transport, and power plants.

Israel would also have to cope with a practical naval blockade, while offshore oil and gas facilities may come under fire, as they are considered relatively easy targets.

The latest warning in this direction was issued by the head of the Israeli Technological and Logistics Directorate ‘Atal’, Brig. Gen. Kobi Barak. Barak said that Hezbollah had the military capacity to “shake the ground” beneath Israel, on account of its arsenal of powerful and precise rockets.
Previous reports emphasized something else entirely, and claimed that the Israeli army had completed its preparations for a conflict on the northern front. The Israeli army was now even more prepared than 2006 for war with Lebanon, those reports alleged, while steering clear as much as possible from discussing Hezbollah’s capabilities.

In the Israeli view, the Lebanese and Syrian fronts are highly flammable, and one stroke of a matchstick is enough to ignite them. A high-ranking military source recently told Israeli daily Yedioth Ahronoth that those who are privy to classified information realize that the current lull is but a “time-out” before war breaks out with Lebanon and Syria.

At the same time, several internal developments in Israel itself have contributed to the warnings over Hezbollah. For instance, the newly formed government led by Benjamin Netanyahu intends to scale back the defense budget for this year and the next. The Israeli army fears its readiness and training programs for future conflicts could be affected.

The threat of war and defense budget cuts also explain the recent shift in the Israeli approach, from glorifying the Israeli army, to emphasizing the strength of the opponent, namely, Hezbollah.

But simultaneously, this exposes the real estimates – and concerns – of the security establishment in Israel as regards the coming war, and also Israel’s powerlessness to prevent its damages.

In its latest assessment of a future conflict, Israel concluded that 1,200 rockets, of various types would hit Israel on each day of fighting. Furthermore, 5,000 warheads are currently pointed towards Tel Aviv, each carrying an explosive payload of between 300 and 880 kg.

Cities and population centers in Israel have no real protection from the rockets of the Resistance. The Iron Dome missile shield system would be mainly used to protect the army’s combat operations, meaning the batteries would be deployed around military airports – and even then it is doubtful they can offer much protection.

Ultimately, Israel’s implicit recognition of the prohibitive costs of any coming war with Hezbollah lends credence to the following equation: While the threat Hezbollah poses is a strong motivation for Israel to wage war, it is also sufficient to deter it from starting the conflict.

This article is an edited translation from the Arabic Edition.

A displaced Palestinian
View all posts by uprootedpalestinians →
This entry was posted in Hezbullah, Iron Dome. Bookmark the permalink.